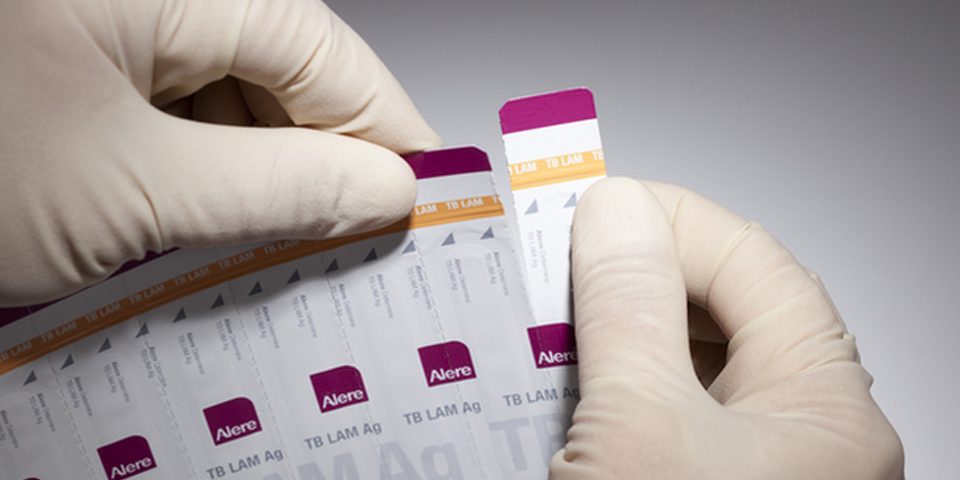 A rapid, and simple to use, low-cost urine sample to test for TB at the bed-side of HIV patients both able and unable to produce sputum, reduced the TB death-rate of patients with advanced HIV. TB treatment can be initiated quicker than if diagnosed using current diagnostic tools.

These are the findings of a multi-centre study led by principle investigator Prof Keertan Dheda of the University of Cape Town (UCT) and colleagues from South Africa, Zimbabwe, Zambia, and Tanzania. The study, a randomised controlled trial using the LAM urine test, evaluated the usefulness of using the simple urine-based diagnostic test (similar to a urine pregnancy-like test) in HIV-infected patients with suspected TB who had advanced HIV. It showed that the treatment reduced the TB death rate in hospitals by almost 20%.

TB is the commonest cause of death in South Africa, has substantial negative consequences on the economy, and has a substantial mortality and morbidity. It is also the commonest cause of death in HIV-infected persons in South Africa. Hospitals in South Africa, and in Africa in general, are inundated with severely ill patients with HIV who also have suspected TB. The TB is often difficult to diagnose because these patients cannot produce sputum samples, and often the TB is ‘hiding’ in organs such as the liver, lymph glands, or brain where it is difficult to access. Diagnosis is therefore challenging and investigation prolonged. The new LAM urine test enables a diagnosis in approximately 20 minutes by simply putting a few drops of urine on a low cost strip test. It can be conducted by a minimally trained healthcare worker at the bedside and therefore an answer is available immediately.

“It was unclear till now whether testing makes any difference to treatment-related outcomes, for example, death rates because there are other TB diagnostic tests available, and many patients get treated on a ‘doctor best guess’,” says Prof Dheda. “But this study showed that the LAM test when used to guide treatment, compared to existing tests and approaches that we use right now, reduced the TB death rate in hospitals by almost 20%. Significantly, these were results obtained using a rapid, and simple to use, low cost bed-side test.”

The other benefits of the study, including being able to rapidly and easily diagnose TB in HIV-infected hospitalised patients unable to produce sputum, who could more rapidly be put onto anti-TB treatment, were an “added value” of the study, according to Prof Dheda. The greatest benefit will be derived in hospitals where diagnostic resources are most limited and where patients present with severe illness, advanced immunosuppression, and an inability to produce sputum.

The data from this and previous studies by Prof Dheda and colleagues have informed clinical practice and the roll out of new diagnostic modalities in TB and HIV endemic settings, resulting in the urine LAM test being endorsed by the World Health Organization (WHO).

The paper was published in the Lancet. Co-investigators from the UCT team, based within the Division of Pulmonology, included Dr Jonny Peter, Dr Grant Theron, Dr Greg Calligaro, and Dr Phindile Gina.