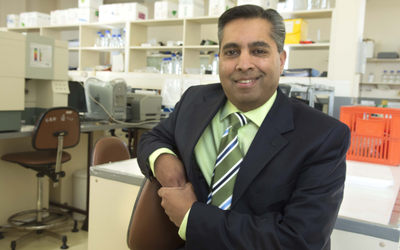 The Centre for Lung Infection and Immunity is headed by Prof Keertan Dheda [MBBcH (Wits), FCP (SA), FCCP, PhD (Lond), FRCP (Lond)], who is Professor of Respiratory Medicine, Director of the Centre for Lung Infection and Immunity (CLII), Head of the Division of Pulmonology in the Department of Medicine at the University of Cape Town and adjunct member of the Institute of Infectious Diseases and Molecular Medicine at UCT, and Visiting Professor at UCL.

He has been the recipient of several prestigious awards including the 2014 Oppenheimer Award, the 2014 NSTF BHP-Billiton Research award, the 2013 MRC Scientific Achievement Award (Gold), and the 2010 International Union Against Tuberculosis and Lung Disease Scientific Award. He holds or has held several multi-national grants as the principal investigator including those from the EU, EDCTP an the NIH. He has published over 190 peer-reviewed papers including 4 first or senior author publications in The Lancet (see key publications below). He holds 3 patents related to new TB diagnostic or infection control technologies, one of which is currently being developed as a user-friendly test for extra-pulmonary tuberculosis. His Scopus and Google H Index is > 50. He serves on the editorial board of the journals PLoS One, the International Journal of Tuberculosis and Lung Disease, American Journal of Respiratory and Critical Medicine, Lancet Respiratory Diseases and Nature Scientific Reports, amongst others. He is the Chief Editor of the South African Respiratory Journal. His scientific achievements and biography were profiled in The Lancet and in the Business Day the leading commercial newspaper in South Africa.

He has a keen interest in medical education and interventional pulmonology including bronchial thermoplasty, ultrasound-guided mediastinal biopsy (EBUS TBNA) and meical thoracoscopy. He holds a visiting Professor appointment at University College London (UCL), one of the top five universities in the UK, and a postgraduate teaching position at the University of Sassari in Italy. He is a Fellow of the American College of Chest Physicians, belongs to several academic societies, and formally served as the Governor for American College of Chest Physicians for the South Africa region, and co-chair of the Latent TB Infection sub-group of the Stop TB Partnership.

Prof Dheda is head of the Division of Pulmonology at Groote Schuur Hospital and the University of Cape Town which provides tertiary respiratory facilities to a population of 3.74 million people including for poverty-related diseases such as tuberculosis, HIV, pneumonia, and other diseases including COPD, asthma and lung cancer. Several new services have been introduced at Groote Schuur Hospital including the provision of endobronchial ultrasound-guided bronchoscopic biopsy (also used in lung challenge research projects), bronchial thermoplasty, and a smoking cessation service, amongst others. The development of the bronchoscopic facilities, in particular, has facilitated several research studies. Tertiary outreach activities are provided to several parts of the Province, which are several hundred kilometres away including George and Upington in the Northern Cape. The Division has also formed a national referral network for complex thoracic surgery for patients with highly drug-resistant TB. Several trainees form Africa have been trained in the Division.

Centre for Lung Infection and Immunity