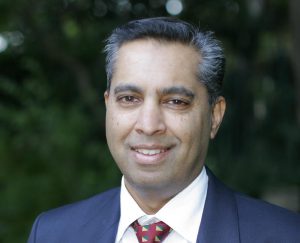 His work in the field of TB has won Prof Keertan Dheda, head of UCT’s Divison of Pulmonology, a prestigious international research prize.

The prize was among four that were presented in recognition of research excellence at the opening ceremony of the Ninth EDCTP Forum in Lisbon, Portugal, on 17 September. They recognise significant achievements by outstanding individuals and research teams from Africa and Europe, including their “major” contributions to the EDCTP objectives of strengthening research capacity on the continent, and supporting south-south and north-south networking.

Dheda, who also heads UCT’s Centre for Lung Infection and Immunity, has focused his research on the design and evaluation of user-friendly diagnostic tools and interventions for drug-sensitive and drug-resistant TB.

He has authored more than 240 peer-reviewed papers, including four first or senior-author original publications in The Lancet, and is the recipient of several other notable awards, including the Oppenheimer Award and the International Union Against Tuberculosis and Lung Disease Scientific Award.

In addition, Dheda has developed five patents related to TB and other research areas.

The Scientific Leadership prize, awarded to “an excellent scientist in Africa working on HIV/AIDS, tuberculosis, malaria and neglected infectious diseases within the scope of the EDCTP2 programme”, carries with it a purse of €10 000, to be used for further research-related activities.

The EDCTP, with a cyclical budget of more than €650million, funds clinical research to accelerate the development of new or improved drugs, vaccines, microbicides and diagnostics against HIV/AIDS, TB and malaria, as well as other poverty-driven infectious diseases in sub-Saharan Africa, with a focus on Phase 2 and Phase 3 trials.

“(Dheda) became part of a long line of pulmonologists and their associated professional societies leading the fight against the disease.”

Dheda, current president of the South African Thoracic Society, has been quoted as saying that his interest in TB was first sparked when he began working as an intern at King Edward Vlll Hospital in Durban after graduating from the University of the Witwatersrand in 1992.

Dismayed by the high number of deaths of TB patients, and the inadequate diagnostic tools and available treatment regimens, he became part of a long line of pulmonologists and their associated professional societies leading the fight against the disease.

At the end of 2017, when he received an A rating from the National Research Foundation (NRF), Dheda said his laboratory was working on several innovative new technologies, including “a new urine-based TB diagnostic test, a next generation electronic lateral flow assay device, and a new pleural biopsy device”.

One example of Dheda’s significant influence can be found in the improved diagnosis of TB among hospitalised patients with advanced HIV across Africa. Performing a multicentric study in four countries involving more than 2 500 patients, he headed up a team of researchers who evaluated a new user-friendly urine-based diagnostic test (urine LAM).

“We showed that the urine LAM-guided treatment strategy reduced mortality in hospitalised patients with advanced HIV by almost 20% (Lancet, 2016), and these findings underpinned the WHO guidelines on TB testing in HIV-infected persons,“ he explained.

In other work, he and his team defined how newer frontline molecular TB tools should be used for on-site diagnosis in clinics (Lancet, 2014), and for active case finding in the community (Lancet Infectious Diseases, 2017).

TB is the biggest historical killer of mankind, with over a billion deaths over the last two centuries, and is now the most common single cause of death in South Africa.

The other three prize winners are:

This work is licensed under a Creative Commons Attribution-NoDerivatives 4.0 International License.